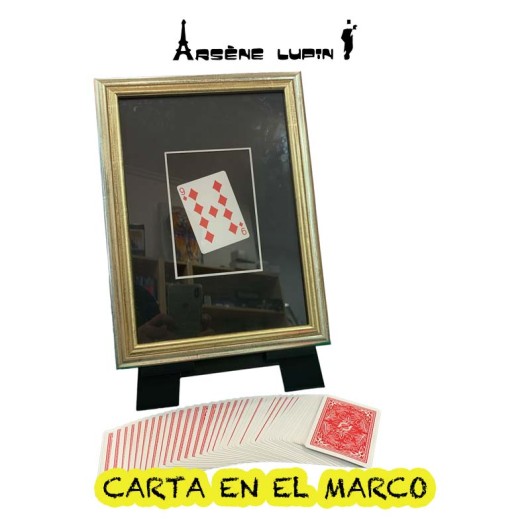 Back on the market the best version of the Card Frame, now updated and improved.

This card in the frame version was invented by Patrick Page called "FLASH FRAME" of the classic Card Frame.

Ever since Colin Rose stopped production of this effect, it has been impossible to achieve.

Now Arsene Lupine has refined the technique and produced a model that excels in several respects.

-Now it can be done anytime or anywhere because although you can hang it on the wall, you don't have to, due to the included tripod.

-Activation can be carried out in several ways.

The effect achieved is amazing.

A spectator chooses a card and shuffles it back into the deck.

You then throw the cards into an empty frame on the wall and instantly the chosen card appears in the frame, behind the glass!

The frame can be held in your hand, hung on the wall, or placed on the table on the included tripod stand.

You activate the mechanism simply by touching the frame, and you can decide for yourself how sensitive it should be.

You can also activate the mechanism by blowing hard on the frame or touching it with a wand.

Instead of doing it with cards, it can be done with a ticket, a prediction, a photo or anything similar.

In the new version of Arsene Lupin, the preparation takes only a brief moment.