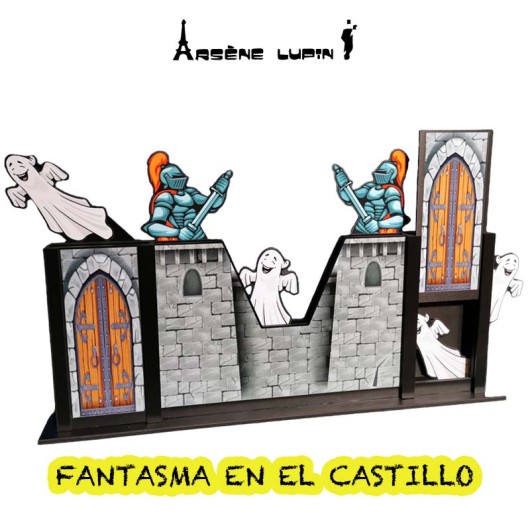 The perfect trick for children's magic.

The magician teaches the representation of a medieval castle to the children.

The castle is very well finished with many realistic details.

The magician begins his story and tells that it is a castle in which ghosts have been seen, because it is haunted

As the magician tells the story, the children may see a ghost in one of the castle's chambers, however he has a pleasant appearance and is shy.

He is more afraid than anything else. He avoids people and escapes, hiding in various corners of the castle.

The illusionist, as a result of the children's observations and their reactions to seeing it, attempts to capture it.

However, he fails to do so.

The ghost flies (noticed by the children) between the rooms of the castle, hides behind a feather, even tries to escape through the chimney.

The magician who tries to catch him but is always "one step" behind him.

Even the involvement of the castle knights doesn't help catch him.

The whole situation triggers an unprecedented stir among the children's audience.

The children are convinced of the total disappearance when the magician shows all the empty rooms of the castle. Everything is visible to show that there is nothing

When this happens, emotions calm down and the audience relaxes.

It is then that the ghost slowly emerges from the buttonhole of the magician's jacket or from some other surprising place.

This triggers another brief burst of emotional reaction from the children, and the performance ends.

Ideal for any time of the year, but special to represent on Halloween.

Made with high quality materials.